The aim of this research is to better inform action to address the current difficulties with GP recruitment, by improving understanding of the factors that influence junior doctors’ selection of general practice as a career.

Main objectives are to:

The project involved a 2-stage data-gathering process; an online survey targeting all doctors during their second year of employment by Foundation Schools in England (F2s), followed by in-depth interviews with purposively selected individuals.

A survey was developed to gather data about Foundation doctors’ career intentions and the factors which underpinned their decisions. Doctors responded to a range of questions to provide the following:

Invitations to participate in the survey were sent by all Foundation Schools in England. Over 800 second year Foundation School doctors (>12% total England cohort) provided a wide range of demographic, educational and experiential data.

The analysis to date has focused on 2 aspects of the survey:

To examine the effect of the junior doctor contract negotiations on career intentions, we categorised respondents according to their first choice speciality preference. We then examined differences between those respondents in how they answered questions related to career intentions and the impact of the contract negotiations. We have published our findings on this data in a BMJ Open paper (listed below).

Summary of survey findings in relation to objectives

Using the total sample of F2s, we find the top 5 most attractive job characteristics to be:

Whilst the  5 least attractive job characteristics were:

The same analysis was conducted to examine which job characteristics were most and least associated with a career in general practice.

The importance weights for association with a career in general practice and the attractiveness of the job characterises are plotted in Figure 1.

We have discussed these findings with Foundation School Directors. We have also worked with a group tasked with production of promotional materials intended to enhance recruitment to general practice, on behalf of HEE North West. Their 2016 promotional materials were influenced by these data e.g. by highlighting the value of continuity in general practice and the role of team work. 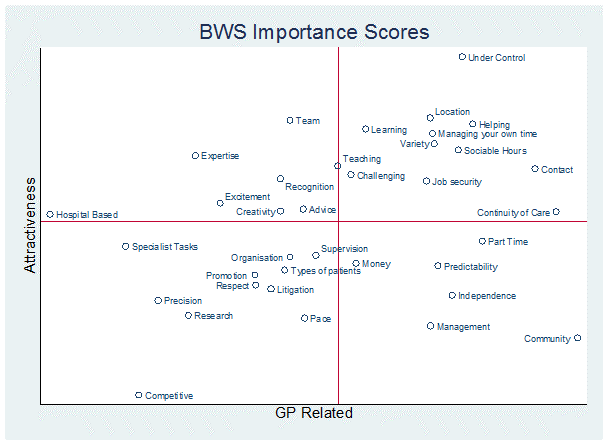 We also estimated latent class models to explore differences between the responses of those stating that a GP career was their 1st choice and those who did not. Some significant preference differences were observed between the preferences of these two groups, with respondents applying to GP training as 1st choice placing relatively more weight on sociable hours and working in the community, whilst the rest of the sample placed relatively more weight on working in a challenging and exciting speciality. However, we found relatively little difference between the two groups in terms of their association of the job characteristics with GP work. This suggests that it is the respondents’ preferences that are driving training application choices, rather than any divergence in what they associate with a GP career.

In our analysis of socio-demographic and educational data, we were only able to confirm a significant difference in:

Findings from the survey supported the development of topic guides for in-depth qualitative assessment to further explore these issues. Individual narrative-inducing interviews were arranged with a purposive sample of doctors, selected for maximum variation in terms of socio-demographic data, educational background and future career plans.

Interviewees were invited to provide narrative accounts of their career path to date and their experiences as students. They were encouraged to speak about their experiences of both GP and hospital teams, and to reflect on how these affected their choices. Wider influences on their choices were explored, and they were asked to consider what might have encouraged them to take a different path.

Interviews were recorded, transcribed and analysed thematically with coding which was managed using NVivo.

Stage 2 concluded after 20 interviews as no new data was emerging at that point and data saturation was deemed to have been achieved. The use of initial and inductive coding provided a rich and contextualised picture of the process by which F2 doctors make career decisions.

Summary of findings from interviews in relation to objectives

F2s weigh up many factors when planning their careers. Among the most prominent was their evaluation of which specialty would provide the best fit for what they want from their work, or how compatible it would be with their intended work-life balance.

They found that student experience of specialties can be very different from working experiences. Their sense of being included in GP and hospital teams and levels clinical support was variable and likely to influence how they perceived that specialty.

On the subject of GP work, doctors identified several aspects which attracted them: variety, breadth of knowledge, flexibility and the ability to act independently. However, several expressed concerns in how they felt about managing clinical uncertainty, or dealing with the emotional aspects of continuity of care. Some were uncertain about the stability of a primary care career and were deterred by attitudes of hospital specialists towards GPs.

Feelings of being under-valued were attributed to, or made worse by, events surrounding the new junior doctors’ contract and related disruption.

Key Findings and Expected impact on the relevant field and Conclusions

We have shown that many factors contribute to F2 career decisions. Apart from gender, and influences during Medical School and Foundation School, our study did not confirm significant links between career choice and other sociodemographic or educational factors included in the survey. We demonstrated that while there is little variation in how F2s perceive general practice, there are differences between the job characteristics preferred by those choosing GP training programmes and those choosing non-GP ST/CT programmes.

The significant shift in popularity from acute hospital training posts to general practice, which was reported in our publication and attributed to issues surrounding the junior doctors’ contract, has since been confirmed by Foundation School reports.

We propose that further work is needed to consolidate understanding of how early experiences in general practice can be modified to facilitate greater recognition by junior doctors that GP work includes job characteristics that they find attractive. Similarly, we perceive a need to generate greater appreciation of characteristics of general practice work which, though highly valued by experienced GPs and patients, have not become important in the brief period of their early clinical experience. Further investigation to identify aspects of GP work which are under-rated by students and recently qualified doctors, would inform the design of changes to the Medical School experience to cultivate an earlier appreciation of how they are perceived by patients and more experienced professionals.

It is increasingly clear that there is a problem with GP recruitment - an insufficient proportion of junior doctors have been choosing to work in general practice and GP workloads have been rising.

The overall objective of this study was to investigate why junior doctors are not attracted to general practice.

We investigated this using two stages;

The survey collected data about the doctors’ socio-demographic and educational backgrounds and their choice of medical specialty. We also asked about job characteristics that they would most and least like to see in their future careers, and about how much or how little they associated these same job characteristics with working as GPs. We asked whether the uncertainty and disruption of the junior doctors’ contract dispute had affected their career plans.

The survey revealed that, apart from gender, differences between Foundation Schools, and when they chose their specialty, other sociodemographic and educational data were not linked to choice of specialty.We demonstrated that F2s had formed broadly similar impressions of GP work, but that their individually preferred job characteristics were associated with their choice of future speciality.

Changes associated with a new junior doctors’ contract had made some hospital specialties less attractive.  Interviews revealed the importance of a good work-life balance and some chose a less-preferred specialty which they felt would be more flexible. The perceived level of challenge, access to support from senior colleagues, and length of training also influenced their decisions.

They felt that general practice was a difficult job but not a highly-regarded specialty and some had concerns about working without immediate access to hospital-based facilities. Many felt under pressure to choose their final career before they were ready to do so and the contract dispute added to feeling uncertain and under-valued.

This study confirmed that multiple factors influence junior doctors’ career decisions and many were uncertain about their future careers.  Attitudes they had encountered as students had influenced how they saw general practice and many felt that opportunities to work there gave them a better idea of what they could expect. Inspirational role models and positive experiences seemed most likely to increase their interest in GP careers.

We have had excellent engagement from two members of our Manchester-based PPI group (PRIMER).

Having been involved in the initial study design, they have continued to work with us, received briefings on findings and continued interested and contributing to development of subsequent projects.

Their comments on the wider aspects of difficulty accessing primary care doctors confirmed the importance of this study; however they recognised that their insights on what is like to be a junior doctor were very limited.

SPCR has recently proposed that this limitation be the topic of a workshop for researchers – plans are in place to schedule a Workshop discuss how PPI activity can engage with healthcare workforce to more comprehensively reflect on the priorities and implications of research affecting workforce and patients.

We have contributed to what is known about the effect of contract changes on junior doctors’ career choices in our first publication.

Engagement with researchers from Medical Education has revealed much similarity between our findings and other studies using different methodologies. We continue to engage with these colleagues as we consider how Medical Schools can have a more positive influence on GP recruitment.

We are preparing additional papers which will present more of the detailed findings from both stages of the research.

The views and opinions expressed therein are those of the authors and do not necessarily reflect those of the NIHR School for Primary Care Research, NIHR, NHS or the Department of Health.